In August I did a painting demonstration at my gallery in Rhinebeck, Albert Shahinian Fine Art. I am accustomed to doing these for my students, but a gallery setting posed different challenges.

Since I do not paint a piece in one sitting, I had to plan carefully to give an idea of the entire process. I paint over a dark ground, building up a silky, glowing surface with semi-transparent layers that need to dry in between.

For the demo, I brought in three pieces to work on. The first, Night Drive, had only one layer. The second and third, Iconic Cloud and High Peaks, were nearly finished, but needed some last work on the clouds to achieve the glow that I am after.

I am not absolutely methodical with my palette, but I do like to mix it ahead of time with a number of subtle color options so that I can apply the first layer without stopping frequently to mix. Here, small amounts of color for a smallish painting.

Passing the painting with the dry first layer around so that folks could feel the tooth of the dark ground on the sides.

Explaining the process, continual in my studio, that I use to figure out what the painting needs next. One of the biggest pitfalls is to be so in love with a section or element of the painting that you fail to see that another area is not up to snuff. While many important decisions are made viscerally during the development of the painting, this is a stage that requires clear-headed analysis. In this piece, what I needed was fairly straightforward---more glow in the sky and in the lights, and some clarification of the car with the taillights.

Beginning to apply a second layer. The light colors need more layering than the dark and more saturated hues to create luminescence, especially in sky and water. Lights, spots of embedded color, usually have halos of warm color around them with white or almost white in the center. There as many different ways of shaping and blending a set of headlights as there are different kinds of clouds…these often take as much of my time as the whole rest of the painting. 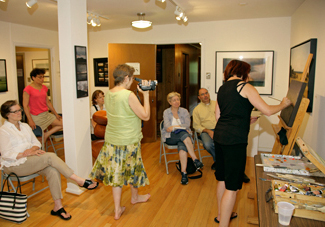 The brush gets used upside down and sideways, to work into the edges that are blended and scumbled, creating my soft-focus surface.

Working on the blacks---the blacker the better. Creating a haze of rich, saturated color---deep red in this piece-- along the edges of black shapes makes a lovely transition into the adjoining area. 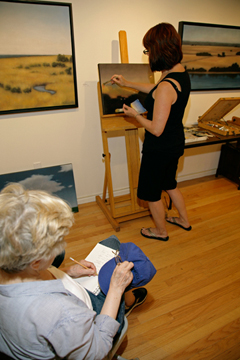 Working, talking, artist taking notes in foreground. A final decision was how clear to make the streetlight poles—since this piece has a blurred photo-on-the-move look, I left them quite faint. 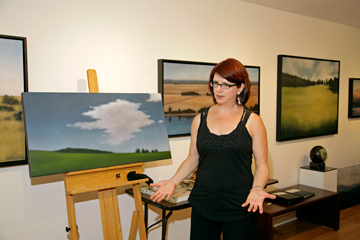 The composition and shapes of “Iconic Cloud” had been worked out in my studio—I had tweaked and added variation to the shape and edges of the cloud for hours. Now, all I needed to do was add some whites to it to enhance contrast and luminosity.

The cloud, being the star here, requires lots of attention. It is not all white, but has many subtle variations of slightly mauve greys. Here, I am adding the last, whitest whites. The layering of semi-transparent paint and careful scumbling of the edges create the glow, so that the cloud does not look like a solid object stuck on the sky, instead clearly reading as embedded in it.

Sometimes I follow my reference fairly closely, and other times it serves more as inspiration. The foreground photo here illustrates that with “Iconic Cloud”, the latter was the case. I am often asked about working from photographic reference—plein-air painting being so popular these days. Since I love to capture fleeting moments–from a thunderstorm to headlights on a lonely road—I need a reference that fixes the image. My minimalist imagery also involves a great deal of editing, reducing detail, cropping, and rearranging, all of which are easier to do with a photo as a starting point. Finally, my process requires studio time, since it is accomplished over time.

Setting up for the final touches on “High Peaks”.

This image had a sky that was hard to capture---a grey-pink approaching thunderstorm look, slightly queasy while also kind of ethereal. The difficult part was going back and forth between the greyer spectrum (somewhat dreary) and the pinks (a tad sweet). It was, in the end, the whites highlights that brought it all together.

Answering questions…like, “How long does it take you to do a painting?” Answer: “Some seem to paint themselves, while others require seemingly endless problem-solving—and I never know at the beginning which way it will go.” 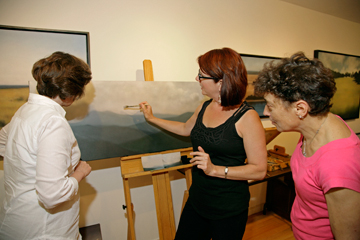 Explaining how important it is to create an elengant, dynamic composition. I prefer varied, interlocking shapes with reverse curves...

…lots of points or triangular forms, and diagonal lines. In a landscape, it is too easy to stick to a series of horizontal bands—but way more interesting to break these up with diagonals and verticals.