Art and Life in the Time of Coronavirus, April 17.

April 12: Today is our Dad’s birthday. We had a sweet Zoom party with family, just missing Tessa among the grandkids. Tony is not in this screen shot, but he hung out for the latter half.

Then Tessa texted a few hours later that she is out of the woods and at Zac’s house. We should get some more detail tomorrow about her plans.

I am creating a zoom painting workshop for a few students who are, of course, stuck at home. Like so many others, they thought that there would be so much lovely down time, but the experience may instead present itself as a big void, punctuated only by anxiety-producing details. (Like, for one student, that she is self-quarantined in a small nyc apartment and her immediate neighbors have the virus, with at least one of them being taken to hospital. So this would make her fearful of her own hallway.)

I am looking forward to the challenge of connecting within the technology, which in this case will be much more intricate than with my hour-long yoga classes. But I’m aware that it doesn’t matter how much we have to muddle through. While I am always conscious the of the information I want to share with my students in any workshop that I teach, I think that just now, being together will be the best thing about it.

April 14: Talk is all about how we will come out of this confinement. It is clear that is will be tentative, messy, little-by little, and still involve infections and death. This virus is so very intricate in all of its details. This was clear from my early reading about Wuhan as they were fumbling about trying to get the first handle on it.

It seems that it can spray way beyond 6 or even 10 feet just through conversation. It appears possible that the incubation period is, on outside, more than 14 days. They worry that a vaccine will not be useful due to mutations, so a treatment is vital. They know that infected folks can be contagious while symptom-free or pre-symptomatic, and that tests often are false negative (not that we are doing nearly enough testing).

So, it seems that we cannot open back up again, or even maybe live in the next several years, with any assurance that the virus is gone. Maybe it is now a part of life on earth, going forward?

In studio, so busy! This is the edition of my first three color reduction linocut, though they are all inked differently and so technically not an edition.

I planned this print for my Atlas/Watershed site map, in progress. It shows the streams’ normal flow, along with flood zones areas and the extreme breach cause by Hurricane Irene in Phoenicia. Shown are the Esopus; north of it the  Stonyclove: Oxclove (which runs through our back yard) and Warner creeks.

I am thinking of one of these for the map, mostly as a color choice:

Still working on the oil-on-board pieces. What makes me happy? How I tweaked the line of the swash multiple times to create that subtle lift and almost vanishing to the right. Just that one thing, the last that I did, took me from liking to loving.

It looks like Tessa will stay in Minnesota for the time being. Reentry into her VT community would include her roommate, who works with (essential businesses) farming and food security, self-isolating, and she could not see friends nor work (like all of the rest of us!). So she is better off in Minnesota with Zac and the 5 others with whom she has been in the woods maple sugaring for the past few months.

Trump is becoming more and more unhinged. I am amazed that it is even possible. He does love conflict, and has reverted—after a short spell of acting almost presidential a little bit of the time, due to national outrage at his irresponsibility over the Covid-19 suffering—to fomenting fights among our states and backing demonstrators against stay-at-home restrictions.

He is severely mentally ill and cannot sustain even the appearance of normalcy for more than a few hours. It makes those of us who are rational scared to death for the future of us all.

I did some color-mixing and related painting conversation via Zoom today with a few students with whom I am friendly. We worked out some bugs and they were happy to take steps forward in their painting practice, as they shelter in place.

This is a spiffed-up version of our chart for mixing blues, using just three colors and black and white: 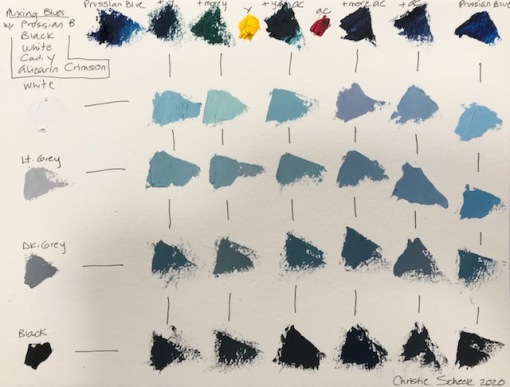 I did a few last tweaks on the new Path painting this morning:

“Path over the Headlands”, 48″x40″, available through the Louisa Gould Gallery.

I’ll be starting a blog post that will document the process of creating a very large commissioned piece, 6’x8′. This is a multi-step process even for a smaller piece and in normal times, and is involving even more logistics due to the size and the constrictions that we are living with. I’ll  publish the post once the final piece is completed, some time in June.