Art and Life in the Time of Corona Virus #2

More excerpts from my blog diary “Art, Yoga, and Life at the Time of Coronavirus”:

Saturday, March 14: The news is not good as regards new cases, but at least the feds and the states seem to finally be getting some traction in regard to testing (or at least real planning for upped testing). It may actually even be in time to prevent what has happened in Italy from happening here. Maybe.

Of course, this all could/should have been done two months ago.

Trump was his usual lying, narcissistic, ill-informed self at the press conference yesterday afternoon. And yet, the markets closed higher just after the start of the conference because of the declaration of a national state of emergency.

People are over-the-top anxious, with just too much coming at us all at once. The daily planning and replanning takes a toll on the nervous system, bandwidth being overwhelmed sometimes early in the day.

In the studio I am having a hard time choosing the image for the 40″x48″ canvas that I recently prepped, part of the grouping that I always do this time of year for my Martha’s Vineyard gallery, Louisa Gould Gallery. So, I am passing on to a smaller 24″x24″ canvas that will be a sea view from Menemsha, with the Elizabeth Islands on the horizon, of a thunderstorm with blue/grey twisty clouds.

Meanwhile, I am so glad that the pick-up of two commissioned pieces happened last Sunday, instead of the original plan for tomorrow, March 15, as they may not be moving around so much now as they were last weekend. These folks have a weekend place in in Berkshire County—where they discovered my work several years ago during my first environmentally-themed Atlas Project show at Thompson Giroux Gallery in Chatham.

They commissioned these paintings for their newly renovated apartment in Manhattan on the 38th floor overlooking the East River.

Their thinking was to have lots of sky—not a literal representation of their view, but capturing the feel of their space.

He is a well known interior architect and eventually pictures of their apartment that include these pieces will make their way to a book and/or publications such as Architectural Digest.

The second piece, a triptych, will hang with a little bit of float between between the panels:

The couple has been buying my work for several years, and now has a selection of monotypes, paintings, collages, a pastel, and the Site Map to my first Atlas Project show, which is where they first became acquainted with my work. I was happy to sell them this complicated piece at very good value, since this one was only attached to foam core and would have started to show some wear and tear if left in my studio. They are having it mounted and framed, their framer taking out all of the map tacks carefully so they can flatten it onto a board, and then reinserting them. 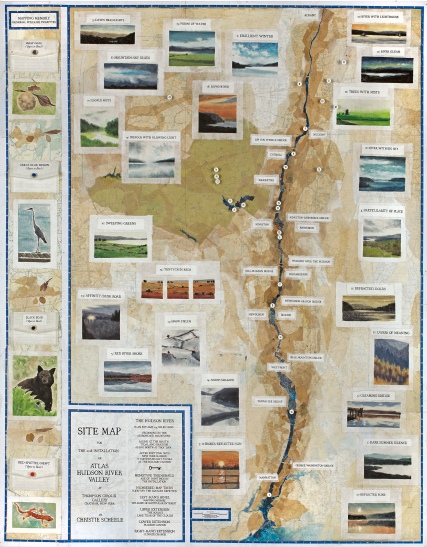 I’ll show some more of the work that they have collected in an upcoming entry, and also installation pics once they have them and share with me.

Sunday Match 15: I almost cried this morning when I read the latest from the NT Times, especially two items.

One, that as Americans are flying back to designated airports from newly travel-banned countries, the bottle-neck at O’ Hare had hundreds jammed in together for many hours while they awaited a health screening. And then later, I heard that they had not even been instructed to self-quarantine if they had no temperature. Coming from Iran and Northern Italy, really??!!

And item number two, a pic of a bar in Manhattan last night with a line of young people, standing close outside, waiting to get in for a St. Patrick’s Day party. The article went on to say that twenty-somethings aren’t concerned because it will not make them very sick, and/or it does not seem real yet (which is true for many).

No concern for their parents and grandparents and what large groups do, in fact, for community spread? Hospitals will be overwhelmed…and what if they get in a car accident and need care or surgery and the hospital has no masks, or available beds, no available doctors? Again, really??!!

So I am not feeling at all optimistic that we will not end up like Italy. Bungling continues at a national, state, and personal level. This has probably been true throughout human history with plagues, but that does not make me feel any better.

I was painting this morning by 8am, and in fact my crappy mood did lift. I have a good start on the 24″x24″ and prepped a 30″x60″ for a stunning image I found in my files a few days ago of the Brewster sandflats at low tide and early sunset.

The pic below is my inventory of studio printing supplies in prep for a lino project with Tony.

This entry was posted on March 19, 2020 by christiescheele. It was filed under Uncategorized .