These three stories describing sales from many years ago warm my heart to this day. They impart my memory of how things happened, likely having picked up intensity and lost and gained detail while traveling into the present, as memories often do.

Quite a few years ago I was enjoying a studio visit with a family sent by a nearby gallery, where they had loved my work but not seen the right piece. The parents were intent on picking their piece, and their kids, an 11 -year old and a 14-year old, seemed happy to be along. The older, a girl, was a young artist, and so we chatted.

After the parents had chosen a pastel to bring home, the teenage girl turned to her father and said that she would really like to buy something, and did he think that it would be an appropriate use for her Batmitzvah money?

I could see him hesitate for a minute, and when he answered I knew that this was caused by a choke of pride and pleasure in his daughter (which can’t be openly displayed to a teenager); and then he assured her that he couldn’t think of a better use for her savings.

She bought two small framed pastels, spending, I am sure, way more money on a purchase than she had in her life. She must now be approaching or past 3o, and I hope she loves them today just as much as she did then.

When my gallery of longest standing, Albert Shahinian Fine Art, was in Poughkeepsie, a woman passing by on her lunch break saw a large piece of mine through the window. Not a regular gallery-goer and most definitely not a collector, she was taken enough with the piece to come in and view it up close and chat for a bit with Albert.

Soon, she started bringing a sandwich and taking her lunch break in the gallery in front of the piece, “Wayne’s Barn”.

This is a large piece, 40″X50″, and while much less expensive than it would be now, a hefty price tag for someone not used to buying art.

But at some point, she started to become convinced that she wanted to find a way to own the piece.

During this time, all I knew was that a woman had been visiting the gallery frequently who was in love with Wayne’s Barn. 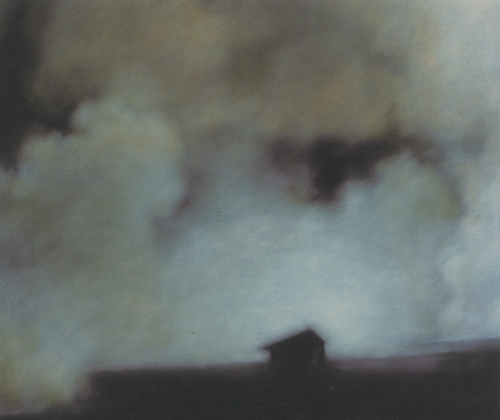 At first, her husband was completely taken aback with the idea of buying a large oil painting (I  remember hearing that the first time she took him to see it he was so rattled that he walked out of the gallery, got in the car, and drove off without her!).

But eventually, he too came to love the piece, and they ended up buying both Wayne’s Barn and another painting the same size to hang across from each other in their apartment on the river. I got to know them after that and they went on to buy another piece or two—lovely people who continue to cherish the work that they chose.

It was a dark and rainy November night many years ago when I was bringing work to a new gallery, about an hour from my house. Actually, I am sure that it must have been late afternoon, but by the time my husband and I arrived and for much of the drive it was pitch dark. We took a road new to us, a two-lane rural highway that had very little traffic that night, lending a feeling that we were driving through and to a wild and lonely spot.

When we arrived at the small city there were lights on in the storefronts, but very little foot traffic along the long business district, due to the time of year and the stormy weather. Locating the gallery toward the end of this stretch, we gamely parked and started unloading artwork.

The gallery was in a pre-war building with large windows in the front, brightly lit up, a rewarding destination. As we got the work in the door and, to the warm sounds of jazz, walked toward the  back, a female voice called out from upstairs. When I identified myself, the owner told me to bring the work back into the office and pour ourselves a glass of wine—she was upstairs looking at photographs with clients and would be down shortly.

We unwrapped the artwork, poured ourselves a glass of wine, and sank into a comfortable couch, listening to the music and looking around at the art. It felt like we had arrived at the last–but best–place on earth after the dark drive, full of sensory rewards.

When the owner came in with her clients, they too sat on a couch with a glass of wine while she wrote up an invoice. Spotting the largest piece that I had brought leaning up against the wall, he asked if we were planning on buying that piece? I said no, that I was the artist, and within about five minutes they had added the painting to their invoice while I wrapped it back up again, and they headed out the door.

The whole experience felt as if I had died and gone to gallery heaven.

This entry was posted on November 11, 2014 by christiescheele. It was filed under Uncategorized and was tagged with Albert Shahinian Fine Art, art collecting, atmospheric landscapes, moody landscape, weather.